“It’s not a graffiti shop”

A guy took a streetwear and spray can store and turned it into a very important youth hangout. I went to have a chat with my friend Tommaso Dorowin, class of ’86, owner of Ninotchka, tireless agitator of the masses and always a reference point for the Florentine underground world.

When one turns onto Via dei Pandolfini to reach Ninotchka, one immediately sees the orange flag waving near the sign, and on the small wooden bench in front of it there is surely someone sitting. The outside walls house various layers of tags and stickers of different colors, while inside a huge painting of Lugosis wraps around the entire store. Here you can find spray cans, clothing, jewelry, piercings, tattoo paraphernalia, prints, books, vinyl, cassettes… almost everything from mostly local self-productions. For those who don’t know anything about this world and want to approach subcultures Ninotchka is the perfect portal to enter it, while for those who are part of it it is a friendly place to live and hang out like a suspended home. It is the place where you on purpose, but also the place you go to when you are alone and feel like hanging out with someone.

But to understand why Ninotchka has become what it is today, one must necessarily understand who its owner is. Tommaso Dorowin, aka Cruko da Rifredi, was born in Florence to a mother from Abruzzo and an Austrian father. He is a foreigner (his nickname is not accidental), yet from an early age he has been an important reference point for the Florentine underground world. His secrets are: having traveled a lot in Europe and having had a sister ten years older than him. Thanks to her he was able to have a window into the subcultures of the 1990s, and with trips to Austria and Germany he was able to see what was outside of Italy, always being one step ahead. The Internet didn’t exist, in those days there weren’t even CDs, almost everything was done with fanzines, cassettes and especially by word of mouth. So once he returned from his travels, he would pass on and tell his friends about everything he had seen.

Already at the age of 12 he founded his first crew, ZRZ (Zeta Ricovero Zone) together with Ninjaz, Puppet and Orso. Then, during his high school years, RBC (Rifredi Bastard Crew) was born, the first crew in Florence that really put rap and graffiti together. They are peers of the artist Inoki in Bologna, as he tells about his experience with the city, they try to tell about their own area, the life of the Rifredi neighborhood, giving back the youth social cross-section of that period. In fact, his love for his neighborhood is truly visceral (again, his nickname is not accidental!) and the sense of belonging very strong, so much so that for Rifredi he eventually really did things, among which one cannot but remember the Summer in Rifredi festival. “It was an August almost ten years ago, I was in Florence with Peppa and Ninjaz, we were hanging around the house, spinning beats and out came this name: Summer in Rifredi. In an instant the whole thing turned into a rap piece that eventually became a motto, an anthem for Rifredi, but also for the city, for all those who couldn’t go on vacation in the summer and stayed here. The scale of this thing then became very big so we decided to make T-shirts that sold out in two days and from there then came the thing of also doing annual summer events. For five years we have been doing the block party together with Rude Boyz trying to involve local entities and artists, there is always a stage where we rap and Ninotchka sets up its booth. I think it’s a beautiful hangout for Rifredi, to date it’s the most youthful and dynamic neighborhood, which has always been an area of occupations (Ex Emerson, Corsica 81) and abandoned buildings, offering many other spaces for painting.”

Over the years Cruko also devoted himself to other events, such as rap and hip-hop concerts, together with the guys from TULLO Soldja. This is how Smoking’Hot was born, which for eight years brought to Florence several national artists: Noyz Narcos, Jack the Smoker, Stokka and Madbuddy and many others, among which we also remember Salmo with his first concert outside of Sardegna. From music he soon moved on to other projects, especially when he got in touch with youth centers.

Artwork created by Mr.G and Moallaseconda for 400Drops - From Cruko's photo archive

Around 2009, the State Railways proposed a grant to the City of Florence to paint an underpass in Rifredi, the project was passed to the Java youth center, which then contacted Tommaso to manage it: “It was a wonderful experience, the first time an institution invites you and gives you money to do something. It was a new experience that made me feel even more that the legacy of our subculture can have a recognized value.” This collaboration was only the first in a long series; Tommaso founded 400 Drops and continues to organize events and initiatives together with youth centers to promote young artists. Initiatives include the facade of the Next Emerson with RUN and the intervention at La Polveriera by Guerrilla Spam. All this also opens for him the doors of the Florence Tattoo Convention for which he was in charge of the interior design.

Eventually it was in 2018 that Tommaso was contacted by the then owners of Ninotchka. After 15 years they decided to sell the store and chose to make the first proposal to Cruko himself, knowing that he would at least partially preserve the soul of a store that has always been underground. Especially since the other two historical stores, Project Zero and Gold, failed to survive and closed their doors. And so since March 2019, Tommaso became the owner of Ninotchka, and all his experience has flowed into this business that immediately became much more than a store, both from the point of view of the products it offers and the socio-cultural dynamics it has established.

“As a kid, I would stand on the other side of the counter and go back even ten times to the same store to see if the price of the thing I wanted had dropped; so I make it a point to have affordable prices and not sell the usual large-scale retail products. It’s important for me to create a parallel market that doesn’t follow the dynamics of fashion, it’s not seasonal fashion, but I try to stimulate small independent productions to spin money in the underground and allow these businesses to exist. It is a professionalism that comes from below. The subcultures are many and we try to offer everyone something, graffiti shop is reductive, you can find something for tattooing, graffiti, prints, graphics, self-made clothing.”

Ninotchka is not a graffiti shop, but a place dedicated to the world of the underground in more facets, able to host also exhibitions, presentations of books or musical productions, live painting, projections and dj-sets; involving here also the mainly local professionalism, but also offering a window on the international scene thanks to people like Lugosis, King Rusto, Oger, Judas Kiss. This double track is what then creates a lot of connections between people, especially between artists who come from different countries or regions who finally find a place to meet and exchange. And then of course there is the cultural factor, to call great artists is to offer something different and to legitimize to the public this kind of art, this kind of culture.

“I like to make connections between local artists and those from outside, things are born, relationships are made. Then often the judgment of society and in general of the older generation, or those who don’t know, is a negative judgment toward writing especially letter writing. Instead by bringing in names that have made a real job out of it, you show that this thing is not just a game, but can be something more.”

Popularizing dynamics of this level could only result in a pedagogical dimension. Indeed, the new generations approach this place as if it were the entrance to learn about another world, and indeed it is, because inside they find a figure like Cruko, ready to welcome their curiosity and accompany them in their discovery.

“Maybe in other stores kids get bounced, they can’t touch things, whereas I welcome them right away and feel responsible to give them an address, not to leave them in the lurch, I want to establish a relationship. I know them all by name, they call me, they write me, they ask me, sometimes mom calls me to find out when her son is coming back. I like to give that imprinting that I had but that has been lacking in later generations. Because in writing there are still rules like respect for others, figuring out where to paint and where not to, or even the relationship with the law and these are things that a 14-year-old doesn’t know. If you throw him out in the wild obviously he can do damage so explaining these things to him, the history of writing and the proper places to paint becomes very important. And they learn very quickly, they are very sensitive.”

When Cruko talks about these guys it reminds me of the year I met him and in which he opened the store, somehow back in the day I felt like one of them. When I moved here now nine years ago, I didn’t know much about graffiti and I didn’t know anything about the Florentine scene, but I still liked the underground world especially from a social point of view. In him I found a person full of desire and curiosity, always willing to lend a hand, to pass a contact and especially to tell his experiences, funny anecdotes, pieces of history. Ninotchka is the place of connections, Ninotchka for us is a friendly home with its doors always wide open. Knowing this place and the energy that animates it has given me (and surely many others) the drive to believe even more in what we do and the confidence to think that it is still possible to do something authentic, even in a battered city like Florence.

IMA, class of ’94, Florentine by adoption. She has combined her classical training with a background always in contact with artists, collectives and places of aggregation. Through this she is now a multitasking figure who moves between music and art, agitating the masses by organizing events and bringing together different people and entities. She is a member of the independent collective and label DE RIO. 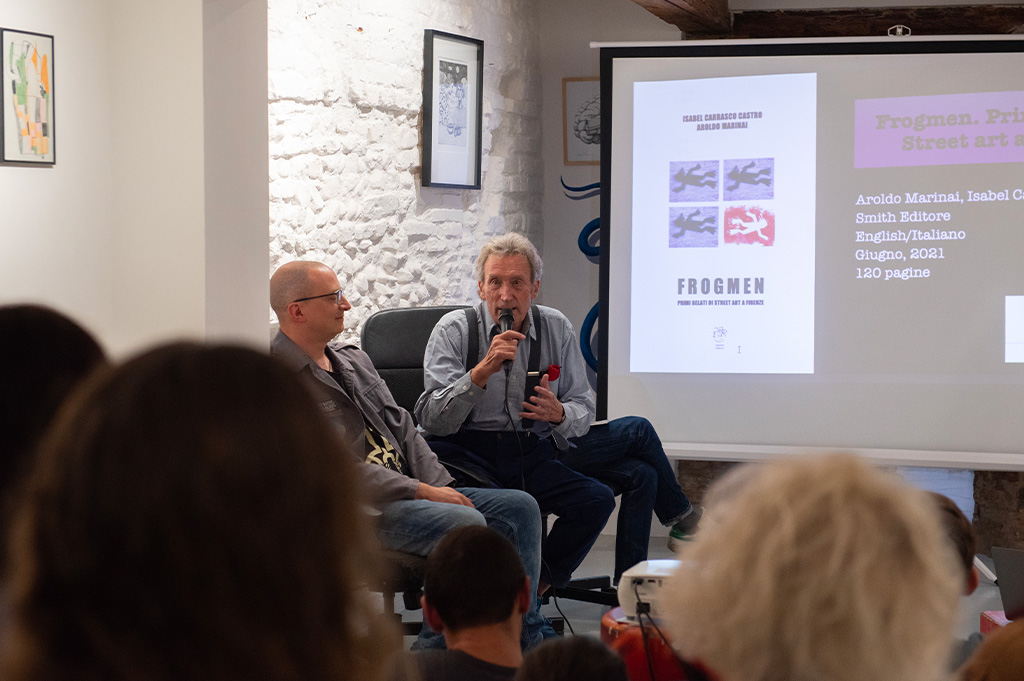 “I try to say something to the city, to everyone who lives in my city.” -Conversation with the artist behind Frogmen (1979), the first street art project in Florence

Are assistants that important to artists? Interview with Loredana Calvet

INTRO. Postcards from the past for a present in the making. Interview with Nian

Save your favorite works and artists and stay up to date on Street Levels Gallery exhibitions, news, events and artist updates

We use cookies to ensure that we give you the best experience on our website. If you continue to use this site we will assume that you are happy with it.OkPrivacy policy